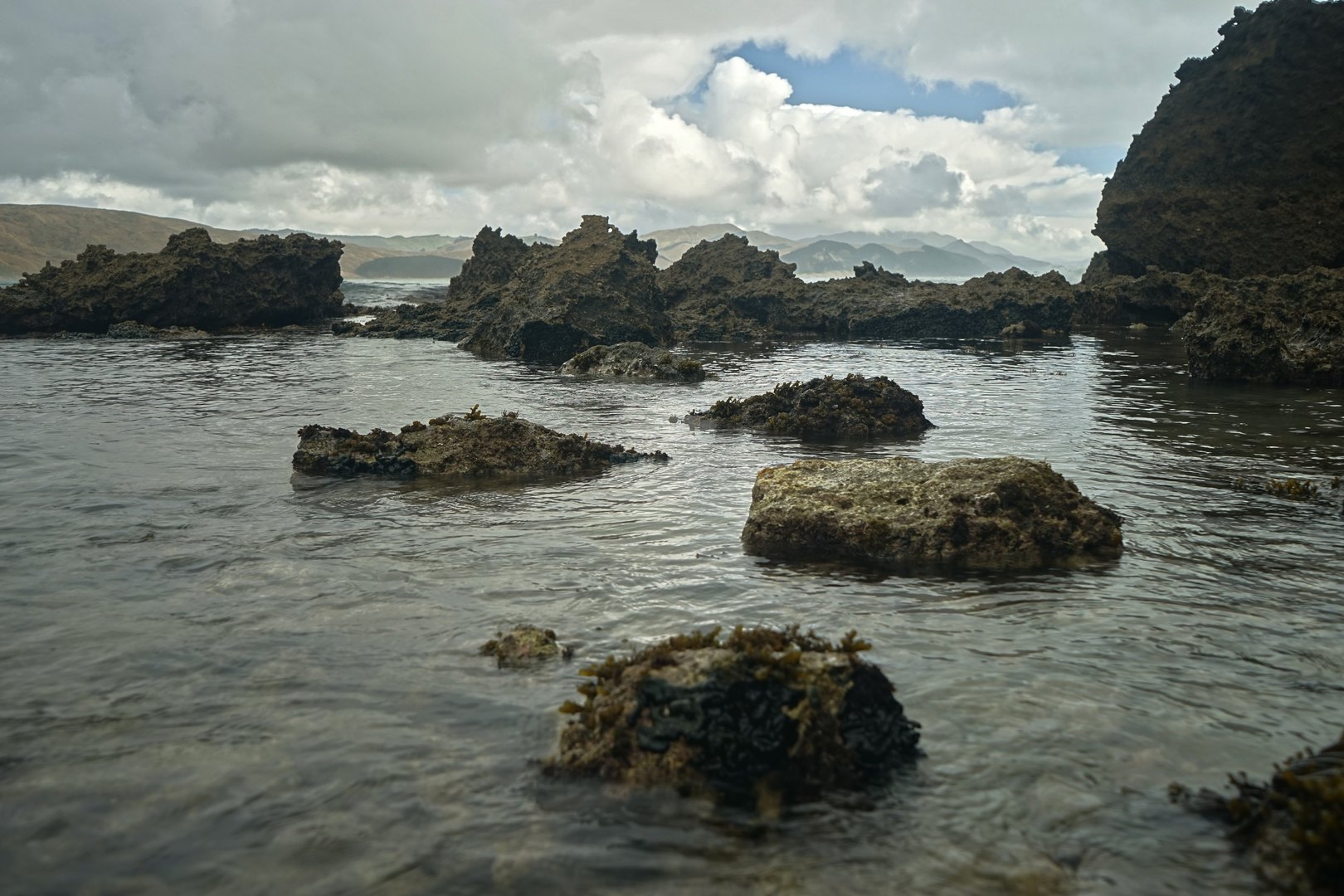 Castlepoint, New Zealand, located on the eastern shore of the north island was actually named by Captain Cook himself, because the rock at the southern end of the bay resembles a castle.

We spotted the Whakataki Hotel just outside the ridge of hills that hides the beach. Unbelievably, this hotel offered free camping in their back yard for RVs, or a mere NZ$5 per night if you wanted to use the well-equipped kitchen and hot showers. This was an absolutely brilliant alternative compared to the sterile option of the postage-sized camping spot for ten times the price at the ugly Castlepoint Holiday Park down the road.

The Whakataki Hotel is not just close to the action; it is the action in this little town of less than 2000 folks! Their lively, neighborhood bar and restaurant is the busiest local bar scene in town. We enjoyed the fresh draft beer and (unlimited) fast internet. (Very few places in New Zealand have free, let alone unlimited, internet.) We met the rowdy sheep shearers drinking away the money they just earned, the regulars eager to explain the nuances of rugby and cricket, and the friendly locals wanting to know who we were and what we thought of their quaint town.

Coincidentally, the Castlepointers were having a fishing tournament for ladies only. What entertainment!

On Saturday night, the award ceremonies were attended by the fisher-women and their cross-dressing cohorts. Yes, really! The local tradition for the Battle of the Babes fishing tournament is for the men to cross-dress at the awards night celebration! A rock band played oldies all evening. We danced the night away even though Ivan didn’t have a dress for the event.

We walked around the lighthouse and hiked the manicured trails on the hills that surround the bay. We explored the wide expanse of beach alongside the lighthouse where the fishing contestants were wading into the surf in the hopes of reeling in the winning catch. They braved the fierce crashing waves threatening to wash them off their stance and pull them out to sea.

At one low tide, we made our way to the rock caves beneath the lighthouse. We were forewarned that the caves are guarded by giant seals. We didn’t want to encroach their personal space because although they look like cute stuffed animals in the photo, they really were fiercely huge  and threatening creatures.

One long-time resident, Jolly, befriended us because we seemed a little different from the average tourists, I guess. He was determined to show off the local products and gifted us some very delicious hogget chops from his freezer and a freshly caught crayfish that was huge. We ate well!

We’ve added this friendly town of Castlepoint to the possible locations to settle if we can’t move one day.