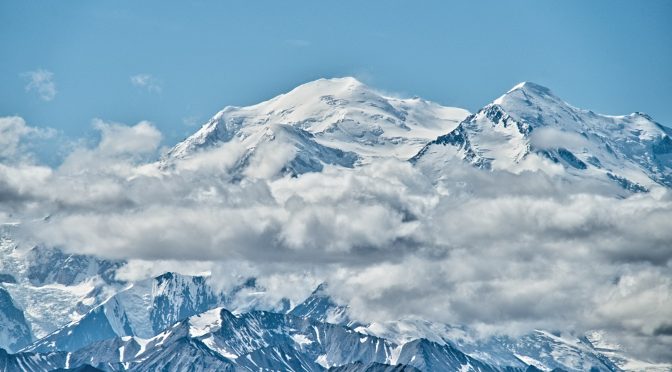 Two words: Park Rangers. They have set up a system that is very successful at protecting the wildlife and the ecology of Denali.

Although there is a road that goes 90 miles into the park, you’re generally not allowed to drive on it. Within the first 15 miles, private vehicles are allowed, but after Savage River, only authorized buses, and special cases.

There is one campground beyond Savage River to which they will let you drive if you are lucky enough to get a reservation. It’s usually booked a full six months in advance. The other exception is if you win a lottery for a one-day pass. The downside is the road has hair-pin turns, without guardrails and is mostly unpaved. You can’t see much if you’re focused on the driving.

Backpackers and campers are allowed to wander in the wilderness, and camp anywhere so long as their camp cannot be seen from the road.

Past the 15-mile no-drive barrier, hiking trails are discouraged.  Backpacking hikers are encouraged not to create trails nor use a trail. Groups of hikers are asked not to walk in the same path (footsteps) so there will be less human impact on the ecosystem.

We wore our bear spray, as did most other hikers. Bear bells that jangled were commonly used by everyone also.  Nearly all bears will avoid human contact though, when they hear voices, so the best way to protect yourself from an inadvertent bear encounter is to bring along a non-stop chatting companion.

We may have made a mistake going in that direction. It’s a gentle rise in that direction but a hell of a descent. A nice mature ranger told us after the hike that she really preferred the hike in the other direction because it was easier on her knees. Where was she when we started, huh?

The Park Service has many fine old school buses painted Ranger-olive, that run a shuttle service over the length of the park road. The cool part is that they will let you off anywhere along the road if you want to do a wild-life hike where there are no trails.

Buses on the return trip will pick up hikers and backpackers on the road that flag them down for a ride. If you want to take a ride into the park from the main Ranger Station, you’ll have to reserve a seat on the bus because they fill up.

There are two ways to get a wildlife “tour”. One is to book a tour company that has permits from the Park Service. The other is to get a seat on a Park Service bus going deep into the park (for about one-third the price).

The bus drivers stop for animals within sight of the road. All passengers are encouraged to shout out if they see wildlife or even think they see something. Then everyone can pile onto one side of the bus to get the photo. As a result of these rules that protect the ecosystem, the animals are really not afraid of vehicles nor people. This makes for incredible wildlife viewing.

We were lucky to book seats for the ride to Eielson Station for the next morning. They often fill up days ahead. It’s about a four hour ride to the Ranger Station 60 miles in. If you are not going to  camp overnight, you have to turn around and ride the bus back.  It’s another four hours back so an early start is a must.

The Denali Campgrounds fill up way in advance of the summer. Since we travel without an agenda, we, of course, could not reserve ahead. No problem. We drove up the road to the 49th State Brewing Company, enjoyed a craft brew and some delicious bar food, and then slept in their parking lot.

It’s a shame we didn’t arrive in Alaska in time to scale Denali’s peaks, which must be done in spring. All climbers begin at the Talkeetna Ranger Station. So having missed the registration for the climb, we opted to visit the Talkeetna Ranger Station instead. Talkeetna, an hour south of Denali Park entrance, is a cute little town with a brewpub. We bought a bottle of birch syrup at the farm there, a common delicacy in the area, which incidentally goes really well with bourbon or whiskey. (Try using a little birch syrup in your Manhattan instead of the grenadine!) Perhaps you can see where our priorities lie … we felt amply compensated for not planting our flag on Denali’s peak, the most difficult in the world because of the mountain’s weather system and lack of porters.

We really enjoyed visiting the Ranger Station where they have flags from teams worldwide that have successfully scaled Denali. Since we were there well after climbing season, the rangers weren’t too busy and we had a fantastic conversation with one of them. We learned about the history of scaling Denali and the kind of equipment the climbers needed.

During climbing season the National Park Service Rangers keep a fully manned Ranger Station at the base camp of Denali. They work both to protect the mountain from becoming trashed like Everest, and to rescue climbers who get into trouble. Until we visited Denali, we’d never heard of Leave-No-Trace mountain climbing. It was just one more thing that makes Denali amazing.