Why You Can’t Miss Carnival in Rio de Janeiro! 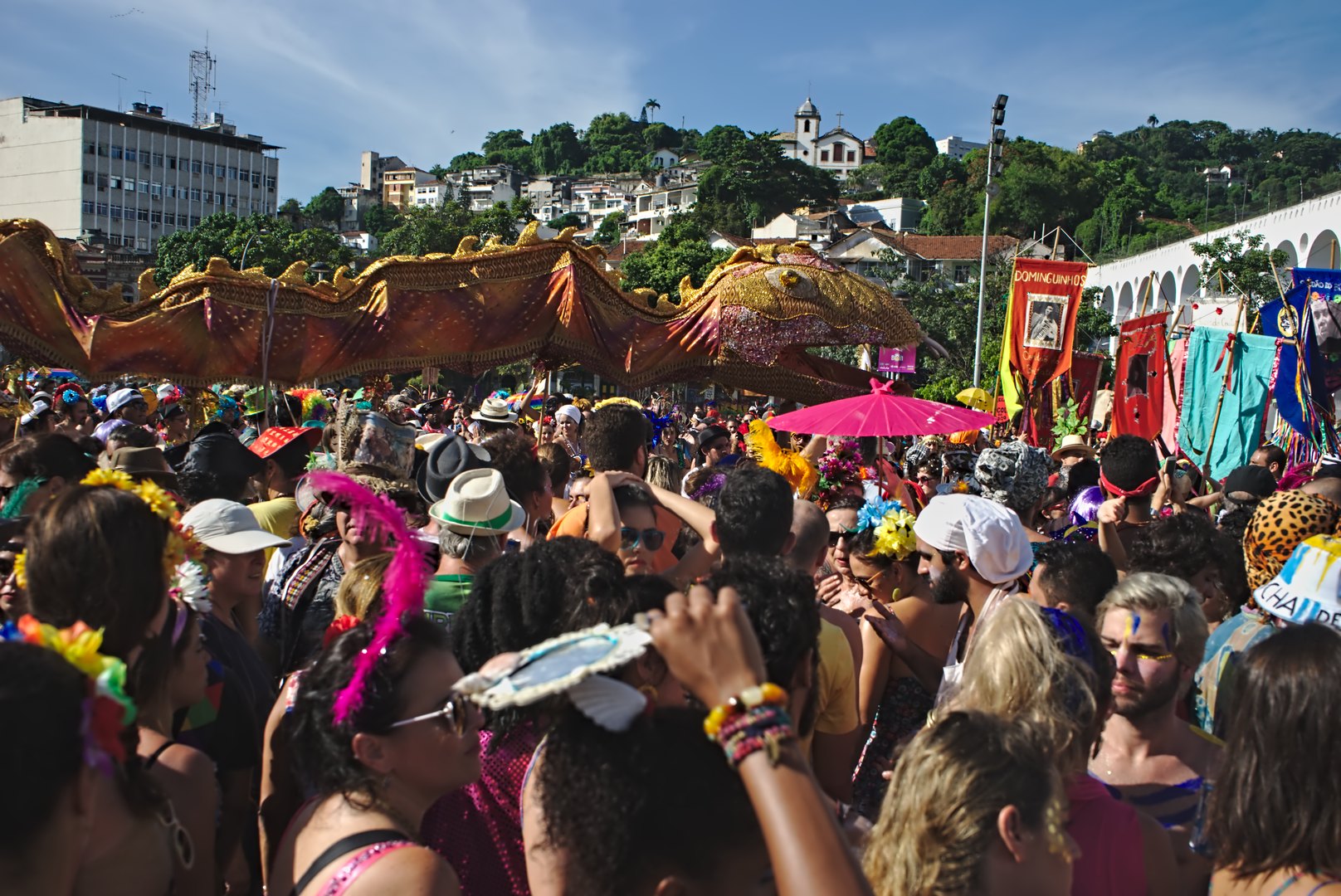 The Origins of Carnival

The beginnings of masks, jesters, debauchery and partying go back in time beyond pre-history;  but the origin of that particular party that many countries call Carnival is more recent. Although no one is really sure, there’s a good chance it started in Northern Italy.

As the Roman Catholic Church tightened its grip on Western civilization, the practice of abstaining from meat and strong drink (alcoholic!) for the 40 days between Ash Wednesday and Easter became common. This period is known as Lent in Catholicism, and the observant are expected to eat simply and lightly for the whole time, to mark Jesus’s forty days fasting in the desert.

The last day to eat meat and drink wine was the day before Ash Wednesday. In the old Italian language, the words “carne levare” comes from the Latin “to lift out the meat”, or to take it away from the diet. “Carne-levare” became “Carni-val” – the very last chance to eat meat and drink alcohol before six weeks of abstinence.

In Venice, Italy, having feasts and masquerade balls before Ash Wednesday started sometime in the 11th century. Venice has the oldest, and most famous of all Carnivals in the world. Over the centuries, the practice of feasting just before the Lenten period spread to many predominately Catholic areas. Even in mostly-Hindu India, the area of Goa celebrates with coconut and jaggery filled crepes, because the colony was founded by the Catholic Portuguese. New Orleans, originally French, calls it Mardi Gras, which, in English, means Fat Tuesday.

Carnival and Samba in Brazil 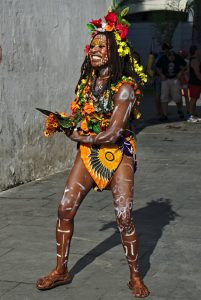 Probably the second most famous Carnival (and maybe the first because Venice Carnival took a long hiatus in the 19th century), is the one in Rio de Janeiro, Brazil.

Rio Carnival’s history is closely intertwined with samba music. When the Portuguese brought slaves to Brazil, the slaves brought their drums and gods from Africa. Force-fed Catholicism in the New World, the Africans invented a kind of underground amalgam of African gods and Catholic saints, called condomble. After a condomble ceremony, the Afro-Brazilians celebrated with music and dancing that was the earliest form of samba.

At the beginning of the 1900s, samba music was influenced by other styles, then picked up and transformed by professional musicians in Rio de Janeiro. The “official” beginning of samba is a song called Pelo Telefono written in 1916. In the 1940s, Carmen Miranda helped to spread this uniquely Brazilian music and dance. Deena and I were fortunate to see an amazing show marking the 100th anniversary of Samba.

Samba music and dance became an integral part of the Carnival partying and drinking before Lent. Altogether, Samba and Carnival, are a huge, month-long party in Brazil. The celebration in Salvador, Bahia has been dubbed the largest street party in the world by the Guinness Book of Records. In Rio, the parades and costumes are majestically grand.

The Contest and Parades

Carnival in Brazil was once nothing more than a group of friends having a party. Everyone had to get the temptations out of the house for lent, and what better way than to have a block party with all your friends to barbecue whatever meat is in the house and drink all the remaining liquor? It had to be finished before Lent;  and of course, you could always tell your boss you’d be late in the morning because you had to go to church for Ash Wednesday.

This started long before the age of boom boxes so everyone brought their drums, chocalhos and pandeiras. Somewhere in the late 1800s, these parties started moving through the streets with their music, dancers and revelers. They were called cordões (cords or strings in English). Today, cordões are usually called blocos. The term blocos, or “blocks” for block party, reflects the neighborhood nature of the original Carnival.

Eventually, some of those early cordões became bigger and a little more organized. The paraders wore costumes and sang a particular samba song. In 1929, the very first contest took place between three of these groups. The winner of this first contest was “Oswaldo Cruz,” which later became the Samba School Portela – the same school that Ivan and Deena paraded with in the Sambadrome for Rio Carnival 2016.

Over the years, the Rio carnival parade contest became more and more organized. In 1984, the contest moved into its very own space called the Sambadrome which was designed by Brazil’s most famous architect, Oscar Neimeyer.

In this photo of us in the Sambadrome, you can see in the background what looks like it might be a McDonald’s M. It’s not. It is, in fact, an abstract derriere, butt, behind, or, in Brazilian Portuguese, bunda. It’s a symbol of admiration for the grace and speed at which Brazilian women can samba.

From that first challenge among three cordões, the Rio Carnival has grown into a huge contest to see who has the best Carnival parade. It is an honor to be champion, and the competition is fierce. The contestants are now called Samba Schools, although no one really goes there for an education. Instead, the Samba Schools are social clubs for their neighborhood. They are large organizations which put together fantastic parades for the annual contest.

Each year, the association of samba schools announces a general idea. From that idea, each school creates a theme, a new samba song, costumes and floats. From all the samba schools, 12 finalists parade by the judges in the Sambadrome on the Sunday and Monday nights before Ash Wednesday. The parades start at sundown and go through the night until dawn. 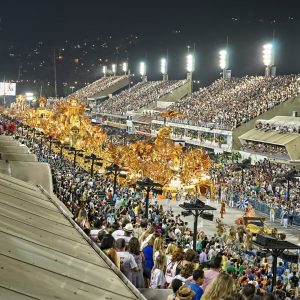 There is nothing in the world quite like the Rio Carnival parades. Each of the finalist parades has 200-400 percussionists that are completely in sync. Each parade has 4,000-5,000 people in costume singing and dancing in unison;  and a half-dozen or more fantastic floats with dancers and singers on them.

Back to the Streets!

Like so many other events, popularity, capitalism and inflation pushed the price of the seats in the Sambadrome beyond the range of the average person in Rio. Samba schools and block parties that were the lowly origin of the event were created by the poor and the lower middle class. No longer can the poor attend the event that they once owned. 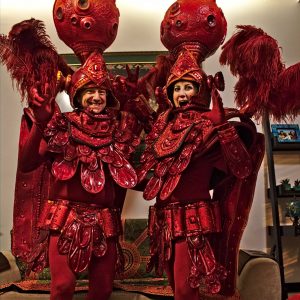 Even the parade costumes have become too expensive for the favelados (slum dwellers) who are the members of the samba schools. We asked one of the organizers why our costumes were so expensive (by Brazilian standards), and we were told plainly that tourists help pay for the costumes for the locals. It’s one of those few times in life when you actually feel good about overpaying.

A movement back to the streets has been in place for a few years now. While the samba schools still have the contest in the Sambadrome, they also now have their own parade in their own neighborhood. There are over 500 known blocos (block) parties in Rio, and probably several hundred more that are not published. 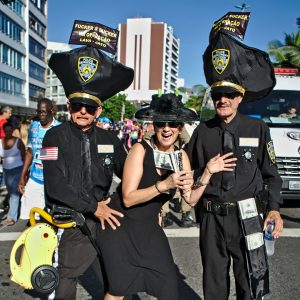 There is even an Occupy Carnival (Ocupa Carnaval) group that promotes taking back the event that was once the province of the people.

The block parties start ramping up in December and are literally all over the city by the time Carnival rolls around. Some of the block parties have been in place for many years and have huge followings.

Some of the big block parties are a celebration of a theme, like the old and famous Banda Ipanema which is a cross-dressing and LGBT celebration. Some, like Simpatia é Quase Amor (which, very tongue-in-cheek, translates to “friendship is almost love!”) have a new samba song for each year.

In this photo, the organizers at a pre-party are picking a samba from a few groups who want to lead the parade. Other blocos, like Boitatá, are known for their incredible musical talent. We discovered also that the Boitatá parade has lots of people who dress up in creative costumes.

Rio de Janeiro is one of the most amazing and fun places to be from New Years through Carnival. Deena and I spent New Year’s Eve on Copacabana Beach where we enjoyed the “100 Years of Samba” show put on by the city. During the next 5 weeks, we took samba lessons and participated in block parties including Banda Ipanema and Cordão do Boitatá.

We spent one of the finalist nights in the bleechers of the Sambadrome;  and the second night we, in full costume, joined the Portela Samba School for their parade in front of the judges and the crowds. Portela came in third place so we were invited back to the Sambadrome the following weekend for the parades of champions. This is where Deena lost her headpiece during the parade and crowds roared “oooo nãoooo…” Good thing it wasn’t for the judging!

It’s impossible not to create fantastic memories during Carnival time in Rio.