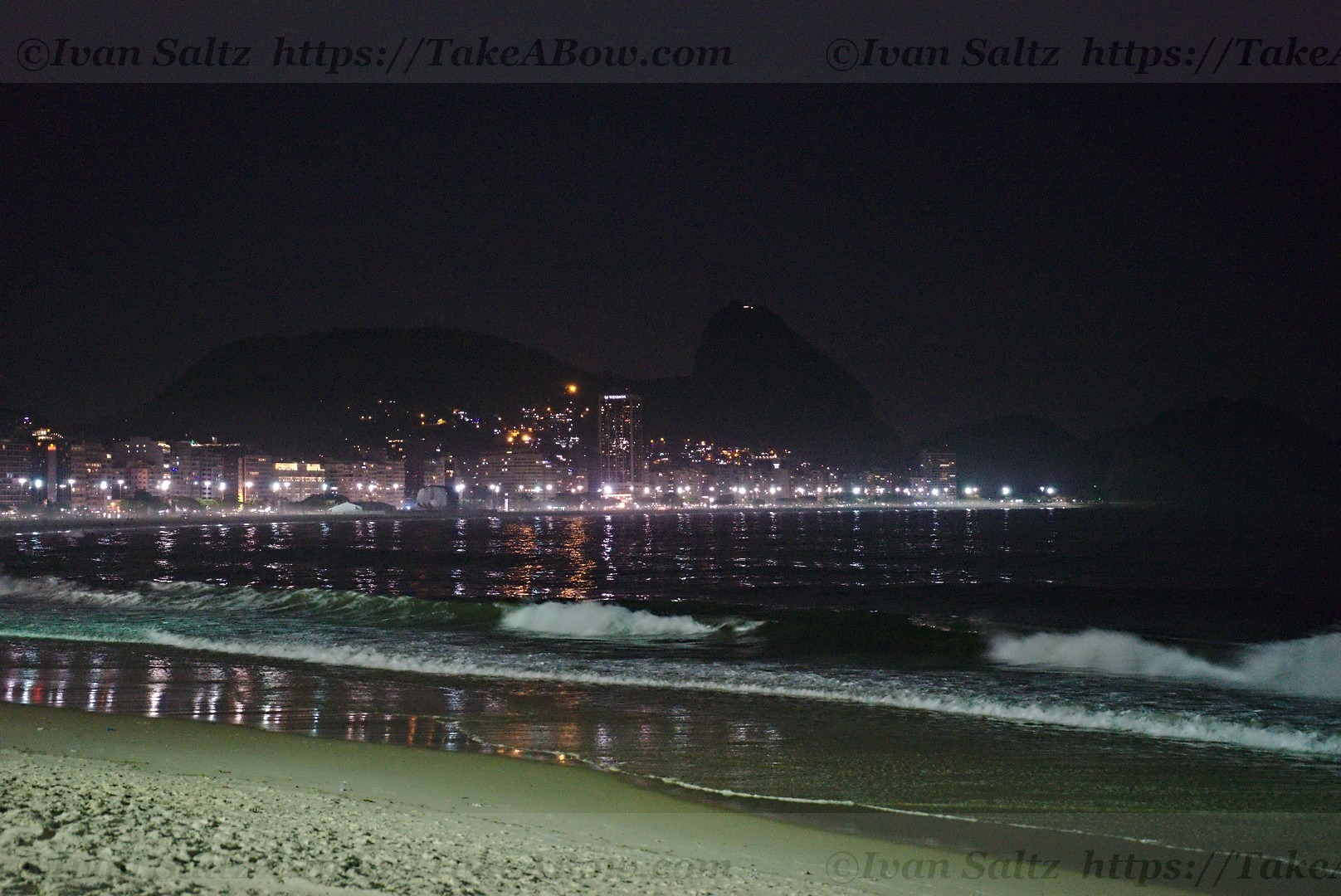 I wrote the following travelogue at the end of 2001. I’m reprinting here partly because we’re approaching the time to start thinking about where to spend New Year’s Eve, and partly because I want a place to save it other than on my computer.

They have closed half of the eight-lane street that separates the hotels from the beach. Of course, they do this every Sunday on Copacabana beach. Pedestrians, bicycles, runners, walkers, delivery minotaurs*, scooter riding kids, roller bladers (one I saw carrying a surfboard) and baby carriages take over the street on Sunday. *(Delivery Minotaur: Imagine the back half of a bicycle connected to a platform riding with two front wheels. It’s a backward, articulated tricycle with the cart in the front, driven, by favela-dwellers hauling ice, soda, beer and green coconuts to the kiosks along the beach. It’s an important part of the supply chain for beachgoers.)

The Rio beaches are beaches done right. Tall buildings are hundreds of yards from the shoreline. The road is between the buildings and the beaches. The afternoon sun is not blocked by high rises the way it is in Fort Lauderdale and Miami. There is a very good reason that Rio’s Ipanema beach is consistently named among the world’s best beaches, and it’s not just the beautiful women in thongs.

The promenade is lined with kiosks, or “bahaccas” as the Brazilians call them. It’s spelled barraca but pronounced bahacca. It’s a small stand right on the beach that serves food and beer. Think of it as the 7-11 of taverns… nearby, convenient and quick. In between, the street vendors ply their wares. Besides the usual trinkets made in China, there are actually some authentic Brazilian trinkets and then there are the foods: shrimp on a stick, a firm cheese grilled over charcoal in front of you, popcorn (regular or sweet), ice cream, peanuts and more. There are men and women who carry styrofoam coolers on their shoulders using homemade rope straps, reinforced with duct tape. From these coolers, they sell beer, water, popsicles, ice cream and Coca Cola.

But this Sunday is different. It is already beginning to feel a little like New Year’s Eve. The crowd has swelled with tourists from other cities in Brazil and from other countries, myself included in the latter group, I suppose. A woman from Denmark asks in halting English the price of corn on the cob from a pushcart vendor. A nearby Brazilian with good English tells her slowly “one and one-half.” As the vendor pulls two ears from his cauldron of steaming water, this Brazilian explains that last week the price was only one Real. Seasonal gouging. (Real is the unit of money in Brazil, pronounced ree-al’. At the time, one Real was about 40 cents.)

As I sit and drink my beer. wondering if it also was only a single Real last week, the media are staking out their positions. Trucks with raised dishes are stationed at regular intervals along the three-mile stretch of beach, like checkpoints on the West Bank. A man walks by me with a Betacam on his shoulder.

Three stages, about a half-mile apart, have been set up in the sand to supply entertainment for the 3 to 4 million people expected by midnight tomorrow. Times Square, by comparison, only gets one million people. Rio de Janeiro is probably the biggest New Year’s Eve party in the world. By “stage”, I mean not only the 1000 square foot platform, but also the two giant video screens and the supporting tents, trailers and generators that probably cover a small city block around each stage.

All the stages on the beach have a schedule of entertainment. One such that I passed, listed four bands and two DJ’s. Near where I am drinking a beer is a truck-sized portable gas generator intended to power that stack of a dozen huge speakers. They are testing the sound system. The guitar was so loud that for an instant I expected to hear a Hendrix’ Star Spangled Banner. But no, it was a Brazilian song.

In front of my table, a walking young couple stops to kiss for a very long time. One of the delivery minotaurs cheers them. A street-walker passes and smiles at me. I have to wonder if she is also more expensive this week.

Rio. There isn’t any other place like it in the world. Happy New Year!