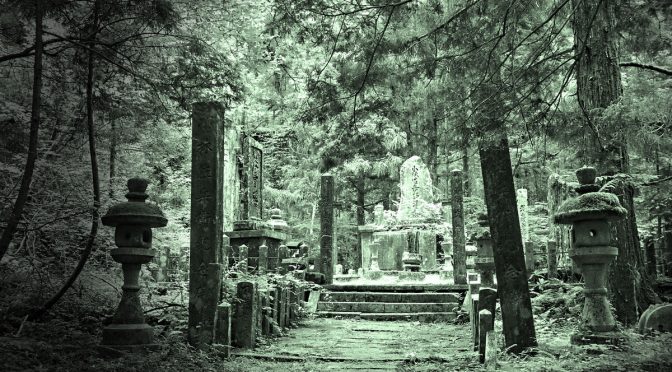 … like the Père Lachaise in Paris where Jim Morrison is interred, the Jewish cemetery in Crakow, Westminster Abbey or the Komarovo in St Petersberg.

Okunoin in Japan is one of those special places. Centuries old, it holds the ashes of famous emperors, shoguns, samurai and poets. Sprawling into the forests of the Koyasan valley, it has an enchanted feeling. Indeed, it is enchanted.

Koyasan is a valley between eight mountain peaks that make its geography like the lotus flower that is the symbol of enlightenment in Buddhism. The location was chosen in the ninth century by the Japanese monk Kukai, who brought esoteric Buddhism to Japan from China. He built a monastery here, and now this little town in the mountains has over 100 shrines, temples and monasteries.

The entire valley is infused with spiritual energy. The monk, Kobo-Daishi as he is now known, requested of his disciples that he not be cremated, contrary to Japanese tradition. Rather, he asked them to place his body in a mausoleum in the forest. Legend has it that his body, in spite of not being embalmed, has not decomposed. Like the Jesus fable, believers say that Kobo-Daishi did not actually die, but rather he has entered a state of deep meditation and samadhi, and is waiting for the rebirth of The Buddha.

Regardless, it is certainly true that the cemetery around him has an amazing power of attraction and peaceful spirituality. We saw new, polished monuments and graves, modest but well tended markers and some whose family has forgotten, died off or moved to other lands.

I myself would love to have my ashes placed in the shade of those graceful pines and the spot marked with coral rock (something geologically out of place I hope). Here, on this special mountain, it’s easy to imagine an afterlife communing with Japanese poets, having ethereal tea ceremonies or learning skills from legendary samurai blade makers. All the while, we will keep an eye on Kobo so we will be among the first to learn of Buddha’s rebirth.

Click on a thumbnail below for the picture viewer.