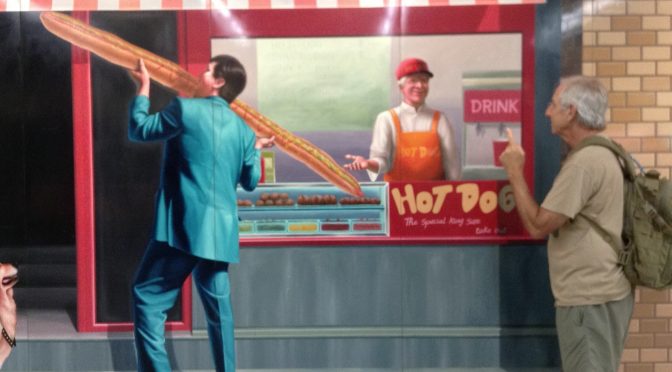 Japan is not cheap.

It also wasn’t outrageously expensive like the rumors we heard. Perhaps in Tokyo, the cost of living is on the same scale as New York City or Paris, but we stayed in Osaka the entire time. (Partly, the reason for this was the high price of the long distance trains. But also, Osaka was such an awesome choice of cities that we were constantly entertained and busy without leaving the region.)

We discovered that it was possible to live pretty well for a reasonable cost. This article is a collection of tips, both practical and money-saving.

Unlike so many places in the world, where you can go into a store on almost any block and buy a pre-paid SIM card, it can’t be done in Japan. The cell phone companies in Japan have universally decided not to support tourists and short term visitors.

Worse, free wifi is not prevalent like it is in North America. Sure, it may be free in Starbucks and some other coffee shops, but there’s a Catch-22. You have to sign up for this free wifi on the Internet, which, of course, you can’t do because you don’t have wifi. Duh. And even if you did figure that out, you’d only get a limited amount of Internet each day and then they cut you off.

Somehow, we labored under the misconception that Japan, which brought us so much technology and electronics, would be flush with Internet beyond our wildest dreams. The reality: in a city of 3 million people, there are probably only four or five places where you can stand and get open wifi. With no SIM card, your “smart” phone is suddenly the village idiot.

The important point here is that if you want to be connected, you better plan for it ahead of time.  We understand that you can get a pre-paid SIM card at the airport, but we arrived in Osaka cruise port so we don’t know where, or how much it costs.

We found this company, DID Global, and rented a mobile wifi cube for about $60/month. The cube has 3G connectivity and allows up to 5 device connections. That was enough for our phones and tablets. We didn’t bother with a cell phone. Instead, we used the wifi and LINE application which gave us free messages and phone calls to LINE users. LINE is one of the popular messaging systems in Asia and we could contact nearly everyone we met.

For other ways to stay connected, check our links page under Japan or Travel Equipment.There are some companies that will deliver a mobile cube to your hotel and provide a return shipping envelope.

One of the big advantages of our slow traveling style is that we can rent an apartment for 3 months for a good deal less than we would spend in a hotel.

We tried AirBnB for a one-week booking to give us time to find an apartment, but that turned out to be a disaster. Lately, we’ve noticed more people are trying to take advantage of tourists by listing their dumps on AirBnB for hotel prices that no locals would rent at any price.

If you do use AirBnB, make sure you read all the reviews. We learned that when there is a review on AirBnB that says the host cancelled the stay, it may mean that a guest saw the place and ran, and asked AirBnB for their money back. That’s how we were identified and since we were the ones to cancel the reservation, we were prohibited from leaving a review on the site to warn others about the highly misleading listing.

One advantage of AirBnB is that they were pretty accommodating. In our Japan travesty, they refunded our money, offered to pay for a hotel for three nights (for up to $250/night), and gave us a future stay credit. (But they didn’t offer to have the unscrupulous host taken out and shot.) All things considered, it’s still pretty safe to book with AirBnB anyway.

Another thing that you can do with AirBnB is make an offer to the host. We have often asked for, and received, a lower price for a multi-day stay.

Outside of the western hemisphere, many hostels have cozy, and comfortable private rooms. We found a very reasonable double, with en suite bathroom in the heart of Tel Aviv, Israel. Some hostels in Asia are converted hotels.

(Disclaimer: I refuse to budget our alcohol and coffee consumption!) First, let me unequivocally recommend drinking sake instead of grape wine in Japan. Or, as they call it, “o sake” where the o is a sign of respect.

We learned that the selection of sake in North America is like Eleanor Rigby’s pitiful gathering of the broken, dirty rice from the floor where a wedding has been. We were fortunate enough to have arrived in Osaka just a few weeks before a big sake tasting festival. Naturally, we attended and became converts.

Previously, we had no idea about the extant of flavor profiles that sake could achieve. There are different types of sake depending on how much of the rice husk is removed and the method of brewing. Want to learn a little more about sake? Click here for eSake.com’s short course.

Good sake is not cheap. You can buy a decent bottle for about the same as a decent wine. Maybe $20 give or take $10 in either direction. There are, of course, much more expensive sakes, but we didn’t try them. After a certain point, my palate reaches a diminishing returns plateau with respect to my wallet.

Naturally, in a restaurant, that price will double. I recommend buying it in a liquor store and drinking at home to save money. If the liquor store has a sake sommelier (yes, I said sake sommelier), be sure to ask the best way to enjoy it. Some sakes are better chilled; some, room temperature; some, slightly warmed.

Anyway, in a restaurant, one should not order sake with sushi. A more economical, er, proper choice is a cold, draft beer. A glass of Asahi draft is usually $3-5 and tastes significantly better than that American Pissweiser, I mean, Budweiser.

Forget about eating fresh fruit and vegetables in Japan. We saw $50 watermelons. I kid you not. When we lived in Florida, friends would beg you to take some mangos off their tree. In Japan? How about paying $35 for a mango? Um, no thank you.

To be honest, we didn’t try to keep our food expense under a particular budget. On average, we spent a total of about $35-$40/day including restaurants, bars, train tickets, fresh-roasted coffee and quality sake purchases.  We ate out often enough, and even tried the Kobe beef a couple times which ran up a $50-$90 bill for the two of us. For the most part, you can have a really good lunch or dinner for $7-$12 per person. Economical, and more than satisfying, is a bowl of ramen. You can check the Ramen Database using the Chrome browser with the translator plugin.

We had an apartment with a little kitchen and a rice cooker. It’s not too expensive to feed yourself here if you shop at the grocery store and cook. With a few exceptions, fresh vegetables and fruit were budget breakers, but the selection of mushrooms and tofu is amazing. This is a good place to be a vegan. For almost all our inside meals, we had brown rice with stir-fried mushrooms and other assorted veggies.

Coincidentally, we also had a gyoza (dumpling) factory right down the street. Usually, we kept a bag of dumplings in the freezer that we could pan fry quickly when we were hungry.

Osaka is the birth place of conveyor-belt sushi restaurants. They’re cheap by Japan standards, about $1 for a piece of very mediocre sushi. If you plan to have a meal of the good stuff served by human staff, you can expect to run up a bill from $15 to, well, probably no upper limit.

The secret here is to enjoy your sushi at the fish market. In the heart of Osaka, there’s the Kuromon Ichiba, a traditional market which also has many already prepared foods to try. We found one fish peddler that had a table in the back of the shop where you could enjoy your fresh sashimi. How fresh? How about watching them cut it off the side of the tuna? Is that fresh enough?

They also make sushi boxes that they sell in the front of the store along with the live octopus, fish, oysters and the rest. For about $10, you can get a box with 5 to 8 really nice pieces of sushi or sashimi. They don’t skimp on the fish, so by Osaka standards, it’s a pretty good deal even at retail because of the quality.

Here’s the best part: If you go at 4:30, all the sushi and sashimi boxes they haven’t sold for the day are half-price. You get sushi for about the same or less than the conveyor belt places and the fish is ten times better!

We’ve heard that the grocery stores and almost all the other markets, about a half-hour before they close, discount the goods that won’t be fresh the next day. We don’t have any personal experience with that, except maybe the time that the meat counter guy took 70% off the ingredients for shabu-shabu when Deena was buying things for it around 7:00pm. I still say it was the low cut dress she was wearing!