Contra Dancing Is NOT About Revolutions 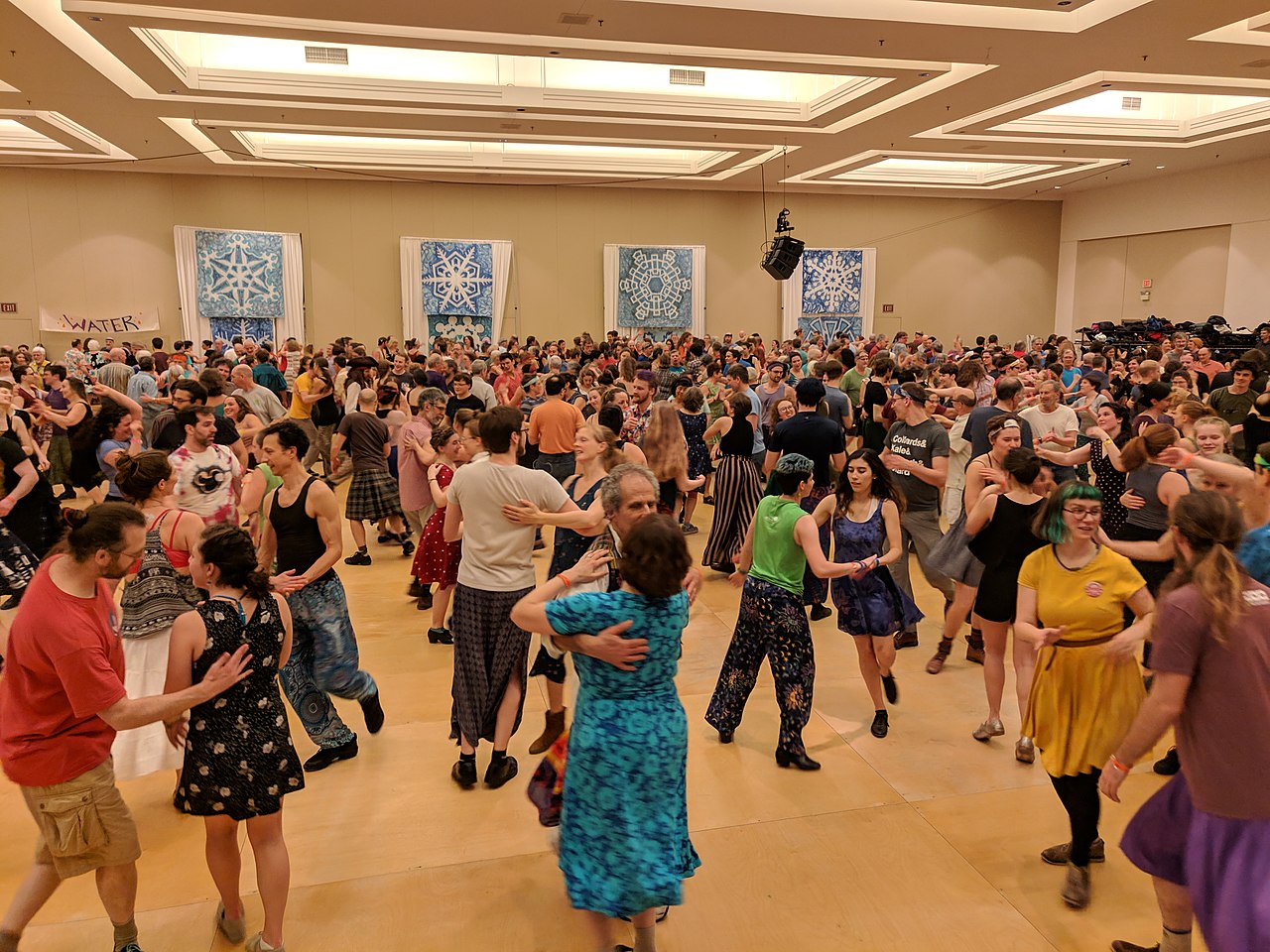 One of the new things that Deena and I took up in Asheville, North Carolina was Contra Dancing. It’s deceptively simple with plenty of room for improvisation. We learned enough basics in three nights out on the floor to dance as a couple.

Contra dance is a North American derivative of 17th century English country dancing. Although it fell out of favor, along with square dancing, it’s in the midst of a revival, and apparently quite popular in the Appalachian hills.1 Couples dance together, but in a long line of couples so that your foursome changes constantly as you move up and down the line.

The number of basic moves is fairly small, and unlike Irish set dancing (which we’ve done), there is a caller that instructs the moves for the first few rounds of each dance until everyone is moving more or less correctly. The real beauty of the contra dance scene is the people are open to beginners, helpful and tolerant of mistakes. It’s a mixed-age crowd that shows up for dancing in Ashevill.

Another great thing about contra dance is that there’s always live music. It needs at least a caller and a fiddle. Deena and I had a blast!

I love dancing as a metaphor for life, or even traveling.

There’s a rhythm to everything in the Universe. In dancing, the rhythm is set by the musician. In theater, the rhythm is set by the playwright and the director. In life, we have to discover our own rhythm. Some days, we’re just not in the right meter, tripping on our own metaphorical toes, making decisions like two left feet, Some weeks, years if we’re lucky, the rhythm is deep in our soul and we move with life like Baryshnikov in a pas de deux.

Watch a child dance and you’ll see uninhibited movement, bold experimentation, amazing grace and hilarious awkwardness. Why should life and love be any different? In contra dancing, I made many mistakes, as did others, and no one blinked an eye. Sometimes I was rescued by an experienced dancer and sometimes I recovered myself, gracefully or otherwise. It’s that way in life too. Sometimes, a friend rescues you; sometimes you just have to recover and find the rhythm again.

In Costa Rica, Deena and I met a retired Iranian living there. He’s a happy, gregarious man who clearly loves his wife. He told us how his heart had been broken and how he’d fallen into a deep low. His life became a hollow shell. He couldn’t eat or go out. Another man, so deeply hurt, may never have loved again, but not this one. He loved again without fear, without history. He loved like a child dances.

We should all live, love and dance without fear — uninhibited and laughing out loud.

"So you can't dance? Not at all? Not even one step? ... How can you say that you've taken any trouble to live when you won't even dance?"

2 thoughts on “Contra Dancing Is NOT About Revolutions”